Reading the Passion Narrative again for the First Time: The Origins of Submission to Authority and Anti-Semitism 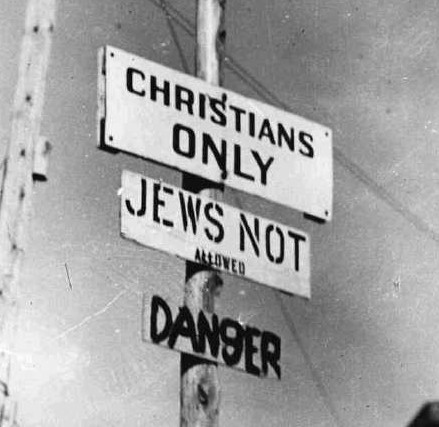 Since the beginning of Lent, I’ve been teaching a seminar on the historical Jesus. About twenty-five of us have come together each week to get closer to the Jesus who taught and served the poor in Palestine two millennia ago.

In that context, it’s nearly impossible for me not to read this Sunday’s Passion Narrative from Luke without applying what we’ve been learning at our group’s Wednesday night meetings. Doing so provides a fresh set of ears for understanding a familiar story as if hearing it for the first time. The result can in turn cause us to re-vision and re-conceptualize our lives as Jesus’ followers living under the sway of U.S. Empire.

As part of our seminar’s study, we’ve been watching excerpts the PBS video series “From Jesus to Christ.” It has helped us see that Jesus and his audiences were first and foremost Jews whose lives were shaped more than anything else by the Roman occupation of their homeland. As such, they weren’t waiting for a Roman-Greco “messiah” who, like the Sun God Mithra, would die and lead them to heaven. They were awaiting a Davidic messiah who would liberate them from the Romans.

Roman rule was especially odious for Jews. After all, they believed they had been given the land of Palestine by their God, Yahweh, whom Jews regarded as their land’s rightful sovereign. And yet, at the time of Jesus, Roman occupiers claimed that their emperor was god. In other words, the Palestine of Jesus’ day was blasphemously controlled by a foreign god. That was intolerable for Jews in general and for Jesus of Nazareth in particular.

So on this Palm Sunday, what do you think was on the minds of the crowds who Luke tells us lined the streets of Jerusalem to acclaim Jesus the Nazarene? Were they shouting “Hosanna! Hosanna!” (Save us! Save us!) because they thought Jesus was about to die and by his sacrificial death open the gates of heaven closed since Adam’s sin by a petulant God? Of course not. They were shouting for Jesus to save them from the Romans. They looked to him to play a key role in the Great Rebellion everyone knew about to take place against the hated Roman occupiers.

And what do you suppose was on Jesus’ mind? He was probably intending to take part in the rebellion just mentioned. It had been plotted by the Jews’ Zealot insurgency. Jesus words at the “Last Supper” show his anticipation that the events planned for Jerusalem might cause God’s Kingdom to dawn that very weekend.

At least Jesus’ Passover words show that something big was brewing for him – something on a par with the liberation from Egypt that had occurred more than 1000 years earlier. So over bread and wine he speaks of a “new covenant” to replace the old one the rebel Moses had mediated from Yahweh. After spending three years preaching about it, God’s Reign seemed so immediate to Jesus that he evidently thought it might dawn even before their next meal. He says “I will not drink wine with you again before the kingdom comes.”

So Jesus issues new and mysterious tactical orders. The advocate of simple living says “Whereas once I sent you out without money or a change of clothes, I’m telling you now to fill your wallet and pack a suitcase.” The non-violent one tells his friends to arm themselves. The courageous teacher of “the Twelve” warns darkly about intrigue, betrayal and denial by members of his innermost circle. Anticipation of all that causes such stress that Jesus eventually sweats blood over it.

Clearly Jesus had his differences with the Zealots. They were nationalists; he was inter-nationalist who was open to gentiles. The Zealots were violent; Jesus was not. And yet the Zealots and Jesus came together on their abhorrence of Roman presence in the Holy Land. They found common ground on the issues of debt forgiveness, non-payment of taxes to the occupiers, and of land reform. Within Jesus’ inner circle there was at least one Zealot (Simon). Indications might also implicate Peter, Judas, James, and John. And Jesus’ friends were armed when he is arrested. Whoever cut off the right ear of the high priest’s servant was used to wielding a sword – perhaps as a “sicarius” (the violent wing of the Zealots who specialized in knifing Roman soldiers).

But we’re getting ahead of our story. . . Following his triumphant entry into Jerusalem, Jesus soon found himself and his disciples inside the temple participating in what we’d call a “direct action” protest. They were demonstrating against the collaborative role the temple and its priesthood were fulfilling on behalf of the Romans.

As collaborators, the temple priests were serving a foreign god within the temple precincts. For Jesus that delegitimized the entire system. So, as John Dominic Crossan puts it, Jesus’ direct action was not so much a “cleansing” of the temple as the symbolic destruction of an institution that had completely lost its way.


It was this demonstration that represented the immediate cause of Jesus’ arrest and execution described so poignantly in today’s long gospel reading.

Eventually however, Jesus has to go underground. On Passover eve he sends out Peter and John to arrange for a safe-house to celebrate the feast I described earlier. The two disciples are to locate the “upper room.” They do so by exchanging a set of secret signs and passwords with a local comrade.

Then comes Jesus’ arrest. Judas has betrayed Jesus to collect the reward on Jesus’ head – 30 pieces of silver. The arrest is followed by a series of “trials” before the Jewish Council (the Sanhedrin), before Pilate and Herod. Eventually, Jesus is brought back to Pilate. There he’s tortured, condemned and executed between two other insurgents.

The trials point up an interesting and important difference between the Jesus of history and the political project of the author of Luke’s Gospel. In the past, we’ve been told the real charge against Jesus was blasphemy; the Jewish authorities were offended because Jesus claimed to be God. However, under Roman law, the Jewish leaders lacked authority to execute criminals. So they were forced to trump up political charges and involve the Romans who alone had the power to inflict capital punishment.

Clearly, however, this was not the case. As we saw last week with the woman taken in adultery, the Jews had the authority to execute people for religious crimes such as adultery or (in Jesus’ case, blasphemy). If Jesus had committed blasphemy, they could have stoned him using the Jewish form of execution.

Instead, Luke presents Jesus as hauled off to Pilate. And completely out-of-character, and after the presentation of clear-cut evidence that the Nazarene rabbi was “stirring up the people,” and despite Jesus’ own admission to crimes against the state (claiming to be a rival king), Pilate insists three times that the carpenter is innocent of capital crime. Such tolerance of rebellion contradicts what we know of Pilate as described for example by the Jewish historian Josephus.

Contradicting all of this as well, Crossan insists that Pilate had standing orders to execute anyone associated with lower class rebellion during the extremely volatile Passover festivities. In other words, there would have been no drawn-out trial.

First of all, like everyone else, Luke knew that Jesus had been crucified by the Romans. That was an inconvenient truth for Luke’s audience who around the year 85 CE (when Luke was writing) was desperately trying to reconcile with the Roman Empire which lumped the emerging Christian community with the Jews whom the Romans despised.

Luke’s account represents an attempt to create distance between Christians and Jews. So he creates an account that exonerates Pilate (and the Romans) from guilt for Jesus’ execution. Simultaneously, he lays the burden of blame for Jesus’ execution at the doorstep of Jewish authorities.

In this way, Luke made overtures of friendship towards Rome. He wasn’t worried about the Jews, since by the year 70 the Romans had destroyed Jerusalem and its temple along with more than a million of its inhabitants. After 70 Jewish Christians no longer represented the important factor they once were. Their leadership had been decapitated with the destruction of Jerusalem.

Relatedly, Jesus’ crucifixion would have meant that Rome perceived him as a rebel against the Empire. Luke is anxious to make the case that such perception was false. Rome had nothing to fear from Christians.


As we have seen in today’s readings, that assurance itself was untrue. It domesticated the Jesus of history who shines through even in Luke’s account when it is viewed contextually. That’s the vision we’ve been attempting grasp in the Historical Jesus Seminar.

Well, if you wonder why Christians have lost their edge . . . if you wonder why they so easily succumb to empires (Roman, Nazi, U.S.) you’ve got your answer. It all starts here – in the gospels themselves – with the great cover-up of the rebel Jesus.

And if you wonder where the West’s and Hitler’s anti-Semitism came from . . .