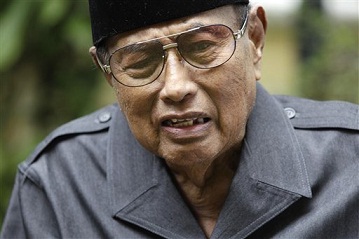 One report described the current standoff in Sabah as “bizarre”.

The reaction of the Philippine government is bizarre if one takes it from the presumption that the Philippines is not abandoning its claim over Sabah.

But if there’s one thing that this “bizarre” incident has made clear, the Philippines is no longer interested to pursue its claim over Sabah.

The state of Sabah, with an area of 76,115 square kilometers, is the second largest member of the Federation of Malaysia. Of the more than 600,000 Filipinos in Malaysia, majority are in Sabah, most of them undocumented.

In 1878, the Sultan of Sulu leased the territory to the British North Borneo Company. It was included when the Federation of Malaysia was formed in 1963.

The Philippine government, then under President Diosdado Macapagal brought the issue to the United Nations. In an UN-supervised referendum in 1963, majority of the people of Sabah preferred to be part of Malaysia.

But when Ferdinand Marcos became president, he tried to “retake” Sabah through Operation Merdeka which failed.

Relations between the Philippines and Malaysia became strained and only “normalized” during the administration of Fidel Ramos, who signed an agreement during a state visit to establish a consulate in Kota Kinabalu to take care of the numerous Filipinos in Sabah.

Ramos, however, was warned by his legal advisers that establishing a consulate in Sabah, which was eagerly encouraged by Malaysian officials, was tantamount to dropping the Sabah claim, which would violate the Constitution.

A consulate is established by a government only in a foreign country, not in its own territory.

Earlier, then Sen. Leticia Shahani filed a bill defining the Philippine baselines which didn’t mention Sabah. Shahani didn’t pursue the bill after it was widely criticized as an attempt to drop the Sabah claim.

The 2009 Philippine Baseline Law does not include Sabah but the Department of Foreign Affairs said “its non-inclusion in the country’s baseline does not mean dropping the Philippine claim on Sabah because it is reiterated in the new law that it does not prejudice the country’s claim to Sabah."

Under the Estrada administration, another irritant with Malaysia arose when President Estrada received the wife of the detained Malaysia’s former Finance Minister Anwar Ibrahim during his state visit.

Reports said the armed supporters of Jamalul Kiram III, the current Sultan of Sulu started arriving in the seaside village of Tanduao in Lahad Datu in Sabah Feb. 12. That was also the time that Moro National Liberation Front forces were shooting it out with Abu Sayaff and the military just shrugged it off. Bizarre.

Malacanang said it is not condoning what the Kiram group is doing in asserting their claim over Sabah. Palace spokespersons described the Philippine claim on Sabah as “dormant.”

Like a dormant volcano, it could wake up from its slumber and explode.

Hoping and praying that this Sabah issue is handled intelligently and doesn’t go beyond “bizarre.”