Made for TV campaign rallies

Election campaign is non-stop, all-season in the Philippines. But officially, for the May election, it starts tomorrow, Feb. 12.

For the opening salvo, the administration’s Team PNoy will have its proclamation rally at the Plaza Miranda while the United Nationalist Alliance will have theirs in Cebu.

Although campaign rallies have lessened their importance as a vote- getting vehicle with the dominance of television and radio as sources of information on elections, barrio folks still look forward to them more as an entertainment show.

Campaign rallies usually feature entertainers. A rally of candidates for national positions (senators in this mid-term election) usually have movie and TV stars to attract a crowd. The masses enjoy free shows. It’s a balm to their weary body after a whole day of toil in the rice fields.

On the part of campaign organizers, campaign rallies are more of photo opportunities for them to show a big crowd on national TV hoping to create a bandwagon.

One good example of this were the out-of-town rallies of Manny Villar in the 2010 elections which were budgeted at P10 million per rally including the air fare, hotel accommodation of the performers and the productions staff, transport of equipment.

Headed by TV host Willie Revillame, a Villar political rally in 2010 was a concert. An excellently-produced concert and usually held in open stadium attracting as many as 30,000 to 50,000 people who line up for the evening activity as early as lunchtime.

It’s dancing and singing from beginning to end by professional entertainers: Andrew E, Geneva Cruz, Ara Mina and others. The candidates and their usual vote-for-me spiels are only inserts, and are even regarded as distractions, in the concert.

In our after concert/rally interviews, the attendees expressed no commitment to vote for Villar. But they enjoyed the show. 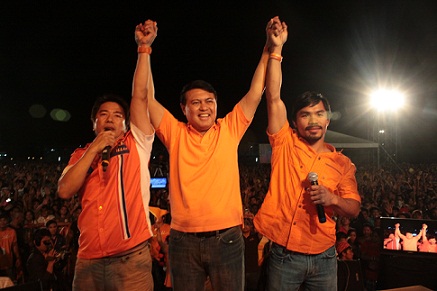 That Villar lost big, despite those huge crowd, proved that the size of rally crowd does not necessary translate into votes.

Organizing political rallies costs a lot and requires a good organization. That’s why political parties these days hold big rallies as an opening salvo and at the close of the campaign period which would be on May 11. They may hold one or two big rallies in vote-rich provinces during the 90-day campaign period.

Aquino campaign strategists in 2010 wisely held several rallies in one night in a province holding them in town plazas, which were smaller and easier to fill up, but looked huge taken by a good cameraman and photographer.

From one town to another, people lined up to catch a glimpse of Aquino. Others looked for his sister, Kris.

Former President Estrada’s rallies in 2010 were much smaller compared to the extravaganzas that he had in 1998 with no less than Da King, Fernando Poe, Jr. (who had his turn of political rallies in 2004) and Nora Aunor joining him onstage.

Rally crowds give a good idea of how the campaign is faring. A well-organized rally speaks of a good organization and adequate logistics which could work for the candidates’ favor on election day. But a ‘hakot’ crown could also mean that they were a paid audience and open to the highest bidder. That means the candidates could not be sure of their votes on election day.

In this election campaign, I imagine that the senatorial candidates would be divided into teams for them to cover as many places as possible.

Although the battleground today for the peoples’ vote is television through those outrageously expensive ads, there’s nothing like a face-to-face encounter and the touch of the flesh to win Juan and Maria’s heart and mind.